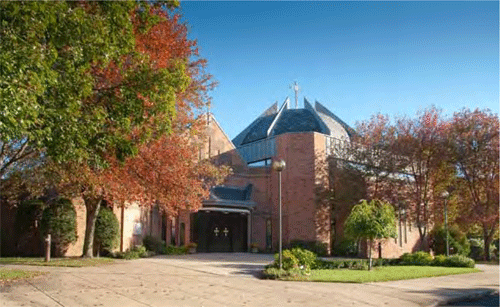 Beloved brothers and sisters in Christ,

Christ is in our midst!

At the Annunciation, we conduct the full cycle of Sunday services, commencing with Orthros (Matins) and the Divine Liturgy on Sunday mornings. Throughout the liturgical year, we also celebrate the feasts of our Lord and the Theotokos (Mother of God), as well as the feasts of all major saints of the Church. From fall through spring, Small Vespers are also celebrated on most Wednesdays nights, with adult religious education sessions following the service.

We welcome all to worship with us, whether you are visiting the area or live locally. May God bless you!

Have a Heart Luncheon - Sunday, February 23, 2020
21st Annual HOPE & JOY Have a Heart Luncheon Following the Divine Liturgy. Performance by the Paradosi Dance Group. Tickets: $25 for adults and $10 for children. Please call the Church office by February 21 for reservations. Tickets will not be available at the door. All proceeds will benefit the Hellenic Cardiac Fund.

Annual Lenten Luncheon - Sunday, March 8, 2020
Join us as we begin the Lenten journey with Christian fellowship on the Sunday of Orthodoxy. More details to follow.

Beloved in the Lord,

Saint Tarasios comes from prominent ancestry that was respected by all in Constantinople including that of the later Patriarch Photios the Great. Tarasios was born and educated in this Great and Royal City. He had embarked on a career in the secular administration of the Empire and had attained the rank of senator, eventually becoming Imperial Secretary to Emperor Constantine VI and his mother, Empress Irene.

During these times the Church was in turmoil over the Iconoclastic controversy. Patriarch Paul, by birth a Cypriot, became Patriarch of Constantinople during the reign of the Iconoclast Emperor Leo IV the Khazar. Paul was virtuous and pious, but a timid man. Seeing the martyrdom, which the Orthodox endured for the holy icons, the Saint concealed his Orthodoxy and be-friended the iconoclasts. Paul eventually repented and resigned his position. He went to the monastery of Saint Florus, where he received the “Great Schema”, a title that a Monk receives when his abbot feels he has reached a high level of spiritual excellence.

When Empress Irene and her son the emperor came to Paul, seeking his wise counsel on a successor to the thrown, he advised them that the worthiest successor to the Patriarchal Throne would be Tarasios, who at that time was still a layman. Nevertheless, like all educated Byzantines, he was well versed in Theology, Holy Scripture, Christian Spirituality, and in the Holy Canons and Traditions of the Church. The election of qualified laymen as bishops was not unheard of in the history of the Church.

Saint Tarasios was an Iconodule (one who supports icons and their veneration and is in opposition to an iconoclast) and was willing to follow imperial commands, when they were not contradictory to the Holy Faith. He proceeded through all the clerical ranks in a short while and was selected Patriarch of Constantinople by the Empress Irene in 784.

Saint Tarasios refused the election for a long time, not considering himself worthy of such a high office. He eventually gave in to the voice of the people and accepted the call of the Church on the condition that Ecumenical Council would be convened in order to address the Iconoclast Heresy.

In the year 787 the Seventh Ecumenical Council was convened in the city of Nicea, with Patriarch Tarasios presiding, there were 367 bishops in attendance. The Iconoclastic controversy was resolved, and the veneration of Holy Icons was confirmed at the Council. The patriarch assumed a moderate policy towards former Iconoclasts. The Church again received the iconoclastic bishops, which repented of their sin of iconoclasm, with love through the Sacrament of forgiveness.

Saint Tarasios led a strict ascetic life and wisely governed the Church for twenty-two years. He would feed, give comfort and shelter to the aged, and to the disadvantaged. The Saint cared for the widows and orphans and on the Feast of Holy Pascha he had his staff prepare a beautiful meal for them, he personally served them all.

A decade after the Iconoclastic controversy, Saint Tarasios was faced with a new controversy. When the teenage son of Empress Irene came of age, he assumed the throne of the Empire in place of his regent mother and was known as Emperor Constantine VI “Porphyrigenitos” (born purple from lack of oxygen).

The new emperor became tired of his wife Maria, the granddaughter of Saint Philaretos the Merciful, and sought to divorce her in order to marry his cousin Theodote. He slandered his wife’s reputation falsely by accusing her of adultery, this was done so that he could put her away in a monastery, thus freeing himself to marry Theodote. When Patriarch Tarasios refused the Emperor’s divorce, the Emperor declared his own marriage annulled and proceeded to marry Theodote. Tarasios immediately ex-communicated the Emperor and the clergyman who had performed the Sacrament and denounced of the royal action. The young ruler was eventually forced to abdicate the throne and Empress Irene regained the Imperial Throne.

Tarasios maintained the dignity of his office while showing great humility through his preference for simplicity in all personal matters, avoiding any semblance of pomp in his life. He exhibited a rare administrative excellence meeting the challenges that arose and in preserving a harmony among clergy and laity.

Saint Tarasios died in the year 806. The Saint, who had led a simple life, was given a funeral with pomp reserved for royalty. The Church properly mourned this great hierarch and buried him in a monastery that he built on the shores of the Bosphorus.

In His Love,
Father Michael

The Annunciation Church offers an online bill pay service for the convenience of our parishioners. Click on the links below to fulfill your Stewardship or make other payments by credit card.

Donations (in memory of, floral, other)

For questions or comments concerning this web site please contact the Webmaster at
helpdesk@annunciationbrockton.org

Visit the Online Chapel for more daily readings, hymns, a monthly calendar of saints and feasts, and more.